Location: About two miles west of Stroud Oklahoma on Route 66, turn south on County Road 3540. About a mile and half down the road on the right is the obelisk.

History:  The fifteen foot imposing obelisk is a remnant marker from the Ozark Trail, now a gravel road near Stroud OK just off of Route 66. In 1913, Ozark Mountains resort operator William “Coin” Harvey established the Ozark Trail Association out of a personal desire to increase vacation travel by automobile, and in turn increase visitors to his resort and improve the road to it. Although based in Arkansas, counties in Missouri, Oklahoma, Texas, and New Mexico joined in, helping to create a southern route from St. Louis through the Ozarks and across Oklahoma and the Texas Panhandle into New Mexico. These roads were the major highway system in the region until Highway 66 was built in the 1920s and would become the basis for the path of Route 66. The Ozark Trail was locally maintained by private citizens and communities as it predated federal highway system with one exception being when the US government built the Ozark Trail Bridge in 1925 over the Canadian River between Newcastle and Oklahoma City. That exception was also the first federal highway project built in Oklahoma. 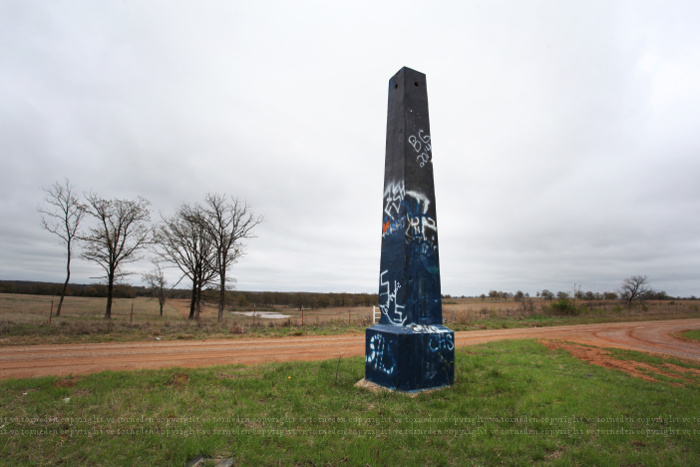 Predating a federal highway system of signs and designated numbers, James E. Swepston of Tulia, Texas (where an obelisk is preserved) led the effort to build a system of markers along the route. Twenty one of the obelisks were erected along the Ozark Trail to indicate the distances between the various cities and communities it connected. With the coming of the federal highway system, sections of the Ozark Trail were absorbed while others were abandoned. Today only seven of the obelisk markers are on the record as still existing, with the four in remaining in Texas (Tulia, Dimmitt, Wellington, and Farwell) being preserved through state archeological landmark status by the Texas Historical Commission and designated with historic markers. Sadly although the one in Stroud sits only a mile and a half off of Route 66, it is abandoned and vandalized. In spite of its current state it is no less imposing and has ample potential to be resurrected through a civic effort to apply for historic marker status and begin maintaining it.